Getting from Lima to Cusco by bus can seem like a mission, but Peru Hop have come to the rescue.  They offer a hop on hop off bus from Lima to Cusco, and vice versa, taking in all of the key places to visit along the way.  I took the Cusco to Lima bus, instead of taking a local bus to each of the destinations between Lima & Cusco, so here is my Peru Hop review.

Peru Hop have regular buses running every other day from Lima to Cusco, and vice versa, going via Puno or Arequipa depending on your route. It seemed a little more pricey than getting individual buses between each destination for the route I wanted, but they promised hostel pick up and drop off so no faffing around with taxis and scary bus stations at ungodly hours of the morning. I checked out other Peru Hop reviews on TripAdvisor (very good), but to be sure I popped into the Peru Hop office in Cusco while I was in town. I didn’t take much selling to, I just wanted to see things for myself, and signed up straight away to take the first leg of my journey a couple of days later.

The buses stop off at key points along the routes to allow you to hop off and spend more time in places if you wish. Or you can stay on the bus and whizz through while still catching some sites along the way. The Peru Hop guides stay with their bus, so if you choose not to hop off and go direct from Cusco to Lima you’ll have the same guide all the way through. I hopped at every stop though, so ended up meeting several guides, all of whom took great care of me.  Peru Hop also have a Cusco to Puno bus which then continues to La Paz, if you want to take the bus from Cusco and travel to Bolivia.

For the first part of my trip, from Cusco to Arequipa, I was actually the only one on the bus. As I found more and more along the way, most people seem to start in Lima, then work their way down to Cusco. I was going the ‘wrong’ way! 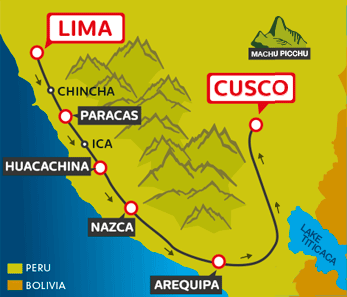 Having the bus to myself made me feel like a rock star & I didn’t mind being the only passenger. I was a little nervous at first; it was my first bus in South America, my first night bus, and I was alone with just the driver & the guide, Diego!   I soon relaxed & forgot my nerves as he made me feel at home. It was an overnight bus, and we left Cusco around 7.30pm; I was already pretty tired so settled down and tried to make myself comfortable. As I tend to get sick on any moving objects I sat right at the front of the bus, and Diego made sure the curtains were open so I could see the road ahead – I’m sure he didn’t want me vomiting either! I dozed on and off, listening to music to pass the time. I didn’t sleep particularly well but that was more due to my nervousness & excitement than the bus!

We stopped in Juliaca to pick up another couple of people, but I was actually asleep then and barely noticed. I didn’t see much of the countryside along the way as it was dark, but was very aware of some winding roads along the way. Nonetheless, I had a comfortable trip, tucked up in a blanket with my feet up against the front window. The buses are well equipped, with reclining seats and a toilet on board, although I chickened out of using the toilet while it was moving I snuck in when we stopped for a few minutes. We finally arrived at Arequipa at 5.30am, and I was dropped off at my hostel as promised – I felt much safer than I would have done alone on a normal bus arriving at that time!

The Peru Hop from Arequipa to Nazca

The next ‘hop’ I had from Arequipa to Nazca was a more rushed affair, there was some delay at another hostel that morning so they were running behind, and I was picked up around half an hour late, although the timetables are of course subject to traffic delays beyond Peru Hop’s control. The guide seemed pretty stressed, and his day got worse as I heard him on the phone trying to organize a taxi for someone who had missed the bus, and sorting out accommodation for the next stop as there was a public holiday and the hostels were full! I’d already arranged my accommodation in Nazca so wasn’t worried about that; and the guide explained to me & the three others hopping off how our flight over the Nazca Lines the next morning would work. That was another weight off my mind actually, Peru Hop organizes activities at all the stops between Cusco & Lima, and so there were several things I didn’t need to worry about doing myself. The flight at Nazca, dune buggies and sand boarding at Huacachina & a boat tour at Paracas were all booked by them.   Off we hopped at Nazca, myself & the 3 others, and the next day we would catch up with the rest of the group at Huacachina.

Alessandra brought us to Paracas, she had a small group of three with her so I slotted in nicely. She was friendly & fun, and took us to her favourite places to eat. After one night she & her group carried on, and I stayed an extra night in Paracas, in no rush to reach Lima.

When I went to meet my new group the following morning I was surprised and pleased to find Diego as my guide again. He remembered me too & explained that in the time I had spent in Arequipa & working my way north, he had reached Lima, returned to Cusco and was almost back in Lima again! It seemed fitting that I should start and finish my hop with the same guide, and I knew I was in good hands. Diego looked after me and his group of nine Irish girls he’d brought from Arequipa very well, watching over us like a worried mother hen as we roamed around a supermarket looking for food, making sure we all got across the busy road & back to the bus in one piece.

An extra stop in Chincha

Along the way, we also had a brief stop in Chincha to visit an old Hacienda with underground slave tunnels, an interesting added extra. Diego guided us around the tunnels, telling tales of punishment rooms and escape routes for the family in case of attack. It was creepy underground, we had to use torches to find our way, and without a guide we would have surely got lost in the maze! We continued our journey to Lima, and once we reached there we were once again dropped off at our hostels, safe and sound and armed with recommendations about where to go and what to see the next day.

I really enjoyed my Peru Hop experience, it was an ideal introduction to buses & roads in South America, and was a great way to meet fellow travellers. All the guides were fantastic, and I even snaffled a free T-Shirt! I thoroughly recommend Peru Hop, it’s definitely the best way to get from Cusco to Lima!

Please note, when I wrote this I had no affiliation with Peru Hop, I just really enjoyed my journey, and found it a great way to tour Peru by bus.

If you’re looking for travel insurance for your trip to Peru, get a quote now from World Nomads.

Or click here to read all of our Peru blog posts. What is the Boleto Turistico Cusco Tourist Ticket & Why Do you Need It?

How to Get from Cusco to Ollantaytambo & Why You Should Go!

Cusco Travel Guide: Things to do in Cusco Peru

Peru Hop Review: The Best Way from Lima to Cusco

I paid $85 to Vomit over a UNESCO Site

3 thoughts on “Peru Hop Review: The Best Way from Lima to Cusco”